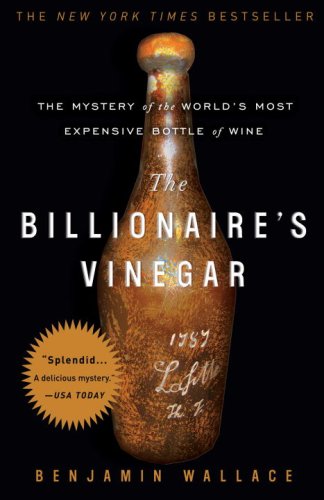 Thomas Jefferson served as the U. S. Minister to France from 1784 to 1789, succeeding Benjamin Franklin.  In 1787, he set out on a 3 month journey through France and northern Italy.  Traveling as a private citizen, he tried to meet the people of each region and sample their way of life.  To his friend Lafayette, he wrote about his travels “you must ferret the people out of their hovels as I have done, look into their kettles, eat their bread, loll on their beds under pretence of resting yourself, but in fact to find if they are soft.  You will feel a sublime pleasure in the course of this investigation…”

Jefferson’s trip also took him to France’s leading wine producing regions.  In May 1787 he visited Bordeaux, where he toured Chateau Haut-Brion and sampled wines from Chateaus Margaux and Lafite.  Before returning to Paris, he ordered 252 bottles of 1784 Haut-Brion from a wine merchant.  When the wine arrived, Jefferson discovered that the merchant had filled the order with bottles of 1784 Chateau Margaux.  Oh well!  No doubt Jefferson and his frequent guests in Paris happily drank the wine anyway.  In May 1788, Jefferson doubled down on 1784 Haut-Brion and ordered another 125 bottles, to be shipped to Monticello.  These never arrived, much to Jefferson’s dismay.

Jefferson’s travels through France, his interest in wine, and the provenance of a 1787 bottle from Chateau Lafite that fetched $156,000 at a Christie’s London auction in 1985 are the subjects of a fascinating book, “The Billionaire’s Vinegar” by Benjamin Wallace.  It reads like a detective novel and is the basis for an upcoming movie, produced by Will Smith and supposedly starring Brad Pitt.