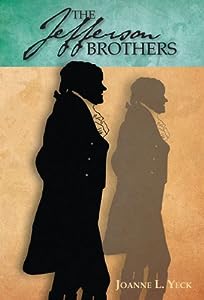 Our guests returning from a visit to Monticello frequently offer the following sorts of comments about Thomas Jefferson:  “amazing intellect”; “Renaissance man”; “never wasted a moment of his life”; and our favorite — “I feel so inadequate when I think of all the things he accomplished!”

So imagine what it was like to be Randolph Jefferson, Thomas’ younger (and only surviving) brother.

According to The Jefferson Brothers, a recent book by Joanne Yeck, Randolph did not grow up in his brother’s shadow — he became a respected land-owner, planter, local official, militia member, and citizen of Albemarle County’s neighboring county, Buckingham, before he died in 1815.

Clearly, Thomas, though absent during most of Randolph’s upbringing, was a significant influence in his younger brother’s early life.  There was a 12-year difference in age, and when the Jefferson brothers’ father, Peter Jefferson, suddenly died in 1757, when Randolph was only 2 years old, Thomas became his younger brother’s unofficial guardian.

But Randolph, after he came of age, prospered by his own hard work and determination.  The land he inherited from his father included 2,000 acres along the James River, directly across the water from the current town of Scottsville.  Randolph built a home there, which became known as Snowden; married his first cousin, Nancy Lewis; started and raised a family of 5 sons and 1 daughter that reached adulthood; and became a successful and prosperous farmer.  Perhaps in recognition of his brother’s accomplishments, however, he named his first son, born in 1782, Thomas Jefferson, Jr.

Writing Randolph’s story was challenging, because Thomas recorded nearly everything that happened in his life, and most of his papers survive, whereas Randolph’s records perished in a fire that consumed his house at Snowden in 1816.  Fire also destroyed the Buckingham County Courthouse and its records in 1869.  Despite lacking these source materials, Ms. Yeck (a recent guest at the Inn) has pieced together a well-researched, well-written narrative, drawing many inferences from a host of other historical documents.

One of the most interesting parts of the book is about the will contest that resulted after Randolph’s 2nd marriage in 1809 to the free-spending Mitchie Pryor, and his sudden death 6 years later.  Unlike his older brother, Randolph was not a spender or a borrower — he died owning valuable property that exceeded the amount of his debts.  So his surviving sons stood to gain substantially by challenging the document that his widow claimed was his “last” will and testament.  The sons argued that a will prepared in 1808, before their father met Mitchie, was the only valid instrument.  In support of their position, they offered a deposition of their uncle Thomas.  Did the testimony of the author of the Declaration of Independence and the 3rd President of the United States carry the day for Randolph’s sons?  Well, we can’t tell you — you’ll have to read the book to find out!

1 thought on “What About Randolph Jefferson?”